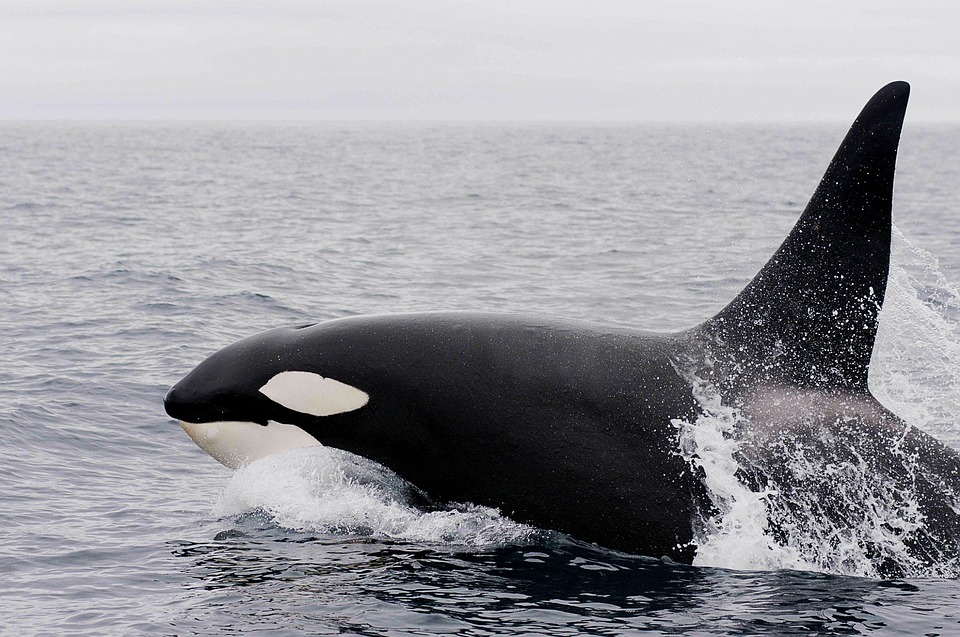 Welcome to Divin’ Into Science!

If you’ve been following the news recently you’ll know that two orcas off Kerry caused great excitement, and prompted this post about all things orca.

We’re going to have a whale of a time.

What makes an orca?

Orcas, or killer whales (Orcinus orca), are the largest dolphins in the world, and are grouped together with other species such as pilot whales and false killer whales in an informal grouping termed “Blackfish”. Being distributed from pole to pole they have the widest range of any mammal after humans.

Orcas exhibit sexual dimorphism, with males being slightly longer than females (up to 9.8m in length, with females up to 8.5m) and with much larger fins. The dorsal fin of a large male can be 1.8m long! This makes it easy to identify animals when seen from the surface, as females and juveniles have shorter, more curved fins.

Orcas may live in all the world’s oceans, but different populations are very different from each other. These differences can be seen genetically and sometimes visually, with different groups having slightly different patterns. Not only that, but they are further distinguished by culture, and since different cultural groups rarely mix, this makes them the only animal apart from humans whose evolution is driven by culture.

How do orcas have culture? I hear you say. Orca culture is often focused around how they hunt. Orcas have a highly varied diet, and are the only cetacean to hunt other marine mammals on a regular basis. Different family groups specialise to hunt different things, and these skills are passed down from mother to calf.

Some of these ingenious techniques include stunning fish with well-timed tail swipes, using synchronised waves to wash seals off ice floes in the Antarctic, chasing down whales using relays until the whale tires out, and beaching themselves to snatch sea lion pups from beaches in Argentina. Orcas have also been observed taking down great white sharks! They ram the shark and flip it onto its back, putting it into a trance like state known as tonic immobility. The orca can then kill and eat it safely. Orcas in New Zealand even catch stingrays!

Communication and Family are key

Orcas are highly vocal, communicating in a range of clicks, whistles and squeaks. Cultural groups develop different dialects, and recently a captive orca was found to mimic human speech. They use echolocation as a means of finding prey and navigating, and some scientists believe this is an additional problem for captive whales, as sound bouncing of aquarium walls could be very confusing and distressing for them.

They can also live for a very long time, even into their 80s or 90s! Their social groups stick together for years, and are often made of family members. A female will typically stop breeding when she hits her 40s, and becomes a “Grandmother” for the pod, helping and teaching the younger members. This is believed to aid the survival of her descendants, and thus her genes. This turns out to be vital for sons, as sons who lose their mothers, even when they’re in their 30s, are more likely to die than her daughters. Orca sons are mommy’s boys.

Orcas have no natural predators apart from humans, and their biggest threat today is ocean pollution. As top predators, they are extremely sensitive to pollutants that accumulate over time, and this can result in infertility, infant mortality and death. A pod in the UK has not seen a calf in 23 years, and a whale that was autopsied last year revealed the highest concentration of toxic pollutants ever seen in the tissue of a marine mammal.

Orcas are incredible creatures, but if we want to keep them around for years to come we have to take better care of our oceans.

Orcas are First Non-Humans Whose Evolution is Driven by Culture, New Scientist