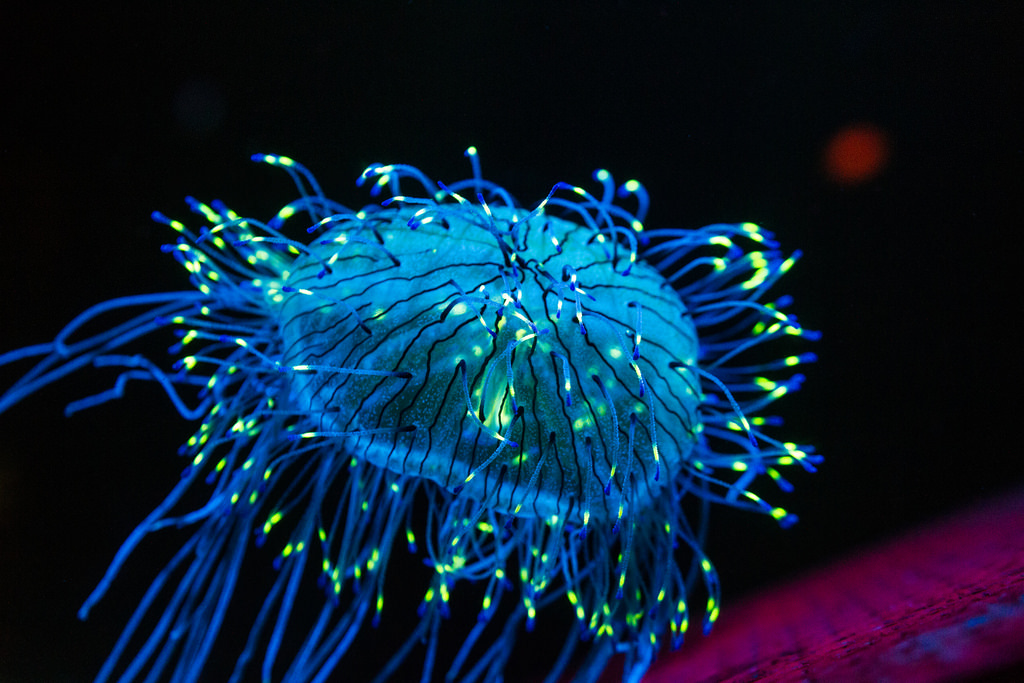 Picture the scene. You’re 600 metres below the sea’s surface in a place known as the Twilight or Mesopelagic Zone. There is very little sunlight, it’s cold, but suddenly the water around you lights up with blue and green light! What’s going on?

How do animals make this light? There are two methods they can use. The first relies on a chemical reaction which takes place in cells known as photocytes, often housed in organs called photophores. The compound luciferin is oxidised by an enzyme called luciferase, and produces light (those of you who are/were UCD science students may remember this experiment in Biomolecular Lab Skills).

The second method uses symbiosis. Animals culture light-producing bacteria in special organs, such as the lure of an angler fish or the pouches beneath the eyes of a flashlight fish, and in return for producing light the bacteria get fed and a home.

So what’s the point? There are many uses for bioluminescence, many of which are not fully understood, and there may be many more functions that we haven’t come across yet.

My, what a pretty light you have…

The most famous use (probably down to Finding Nemo) is the use of bioluminescence to find prey. The most well-known is the deep-sea anglerfish. Females have a light-producing lure that hangs in front of their faces, and this glow draws other animals in to investigate where they are snapped up (males are tiny and parasitise females, so don’t have lures). Pacific blackdragon fish have a similar lure on their lower jaw which can be moved around to draw prey in.

Most bioluminescence is blue or green, but some creatures can produce red light. Red light is one of the first colours to disappear under water, and many deep-sea animals are coloured red as this makes them almost invisible. Emphasis on the almost, as the dragonfish and stoplight loosejaw have red searchlights that light up red animals hiding in the dark. As most animals can’t see this searchlight, the prey is unware that it’s been spotted until it’s too late.

Bioluminescence can also be used for defence. The hatchet fish lives in the Twilight Zone and has a line of photophores on its belly. When they light up, predators looking up find it very difficult to pick out the hatchet fish against the faint light from the surface. The velvet belly lanternshark also has these, as well as glowing dorsal fin spines that are believed to warn away predators. They also look like tiny lightsabers *zwoom*.

Some squid and polychaete worms use sacrificial body parts. These glowing bits can be detached as a decoy, and give the animal extra time to escape. Firefly squid are covered with shimmering lights that may help confuse predators, and they can also produce bioluminescent ink to further baffle them. Some deep-sea shrimp also do this, and if the predator gets coated in glowing ink then they themselves become more conspicuous to their predators. Life is tough kids.

It’s not all kill or be killed. Many animals use bioluminescence to communicate. The flashlight fish has shutters of skin which it can use to cover its glowing pouches. By opening and shutting them they can communicate with one another, almost like they’re using Morse code. Other animals, such as the cookiecutter shark, have species-specific patterns that they can use to signal to each other. Angler fish, crustaceans called ostracods and octopuses may use bioluminescence to signal their sex and attract mates. Sexy.

8 Marine Creatures that Light Up the Sea, Discover Magazine

How the Navy Tried to Turn Bioluminescence Against the Soviets, Atlas Obscura

The Brilliance of Bioluminescence, TED Ed